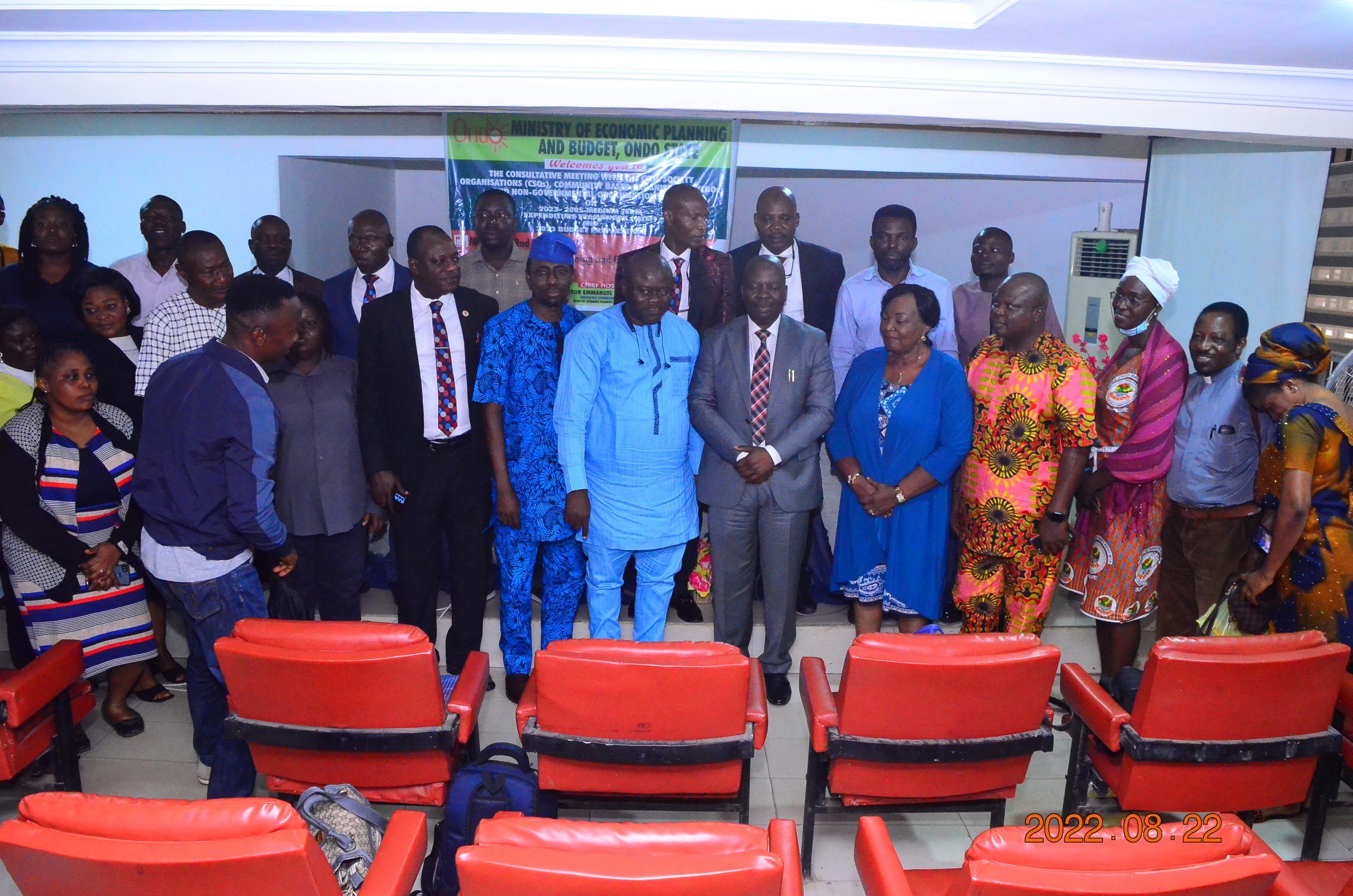 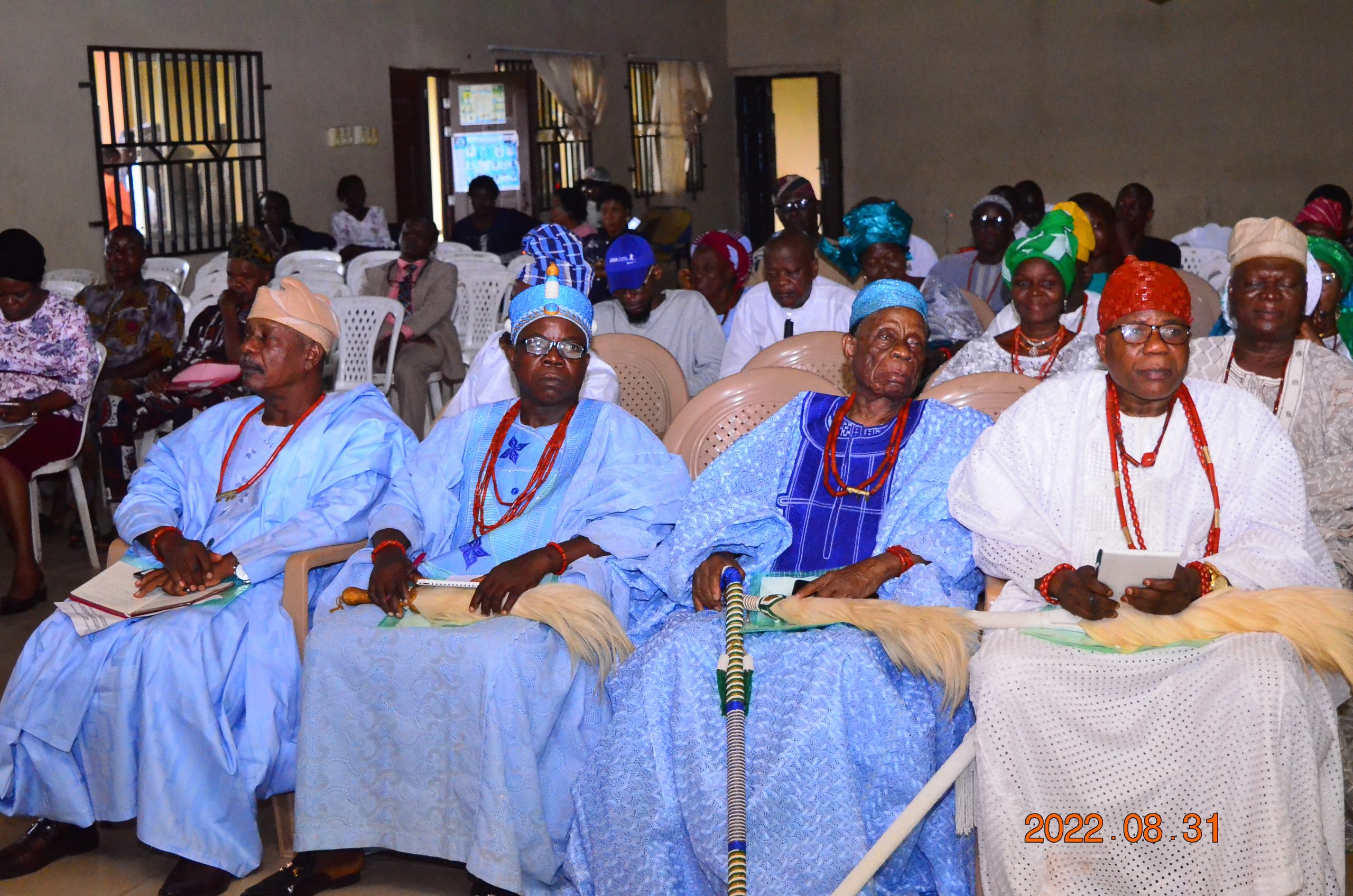 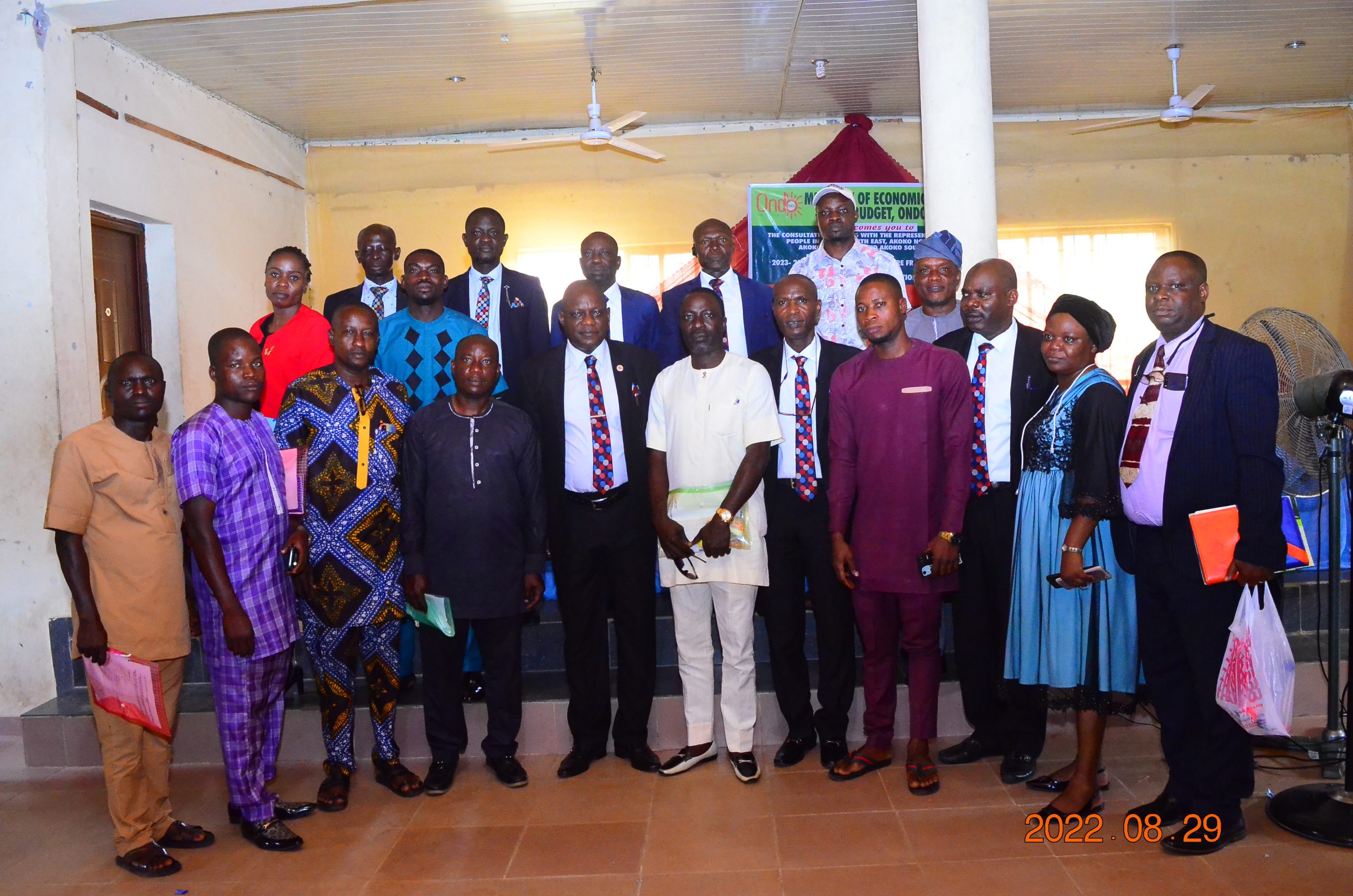 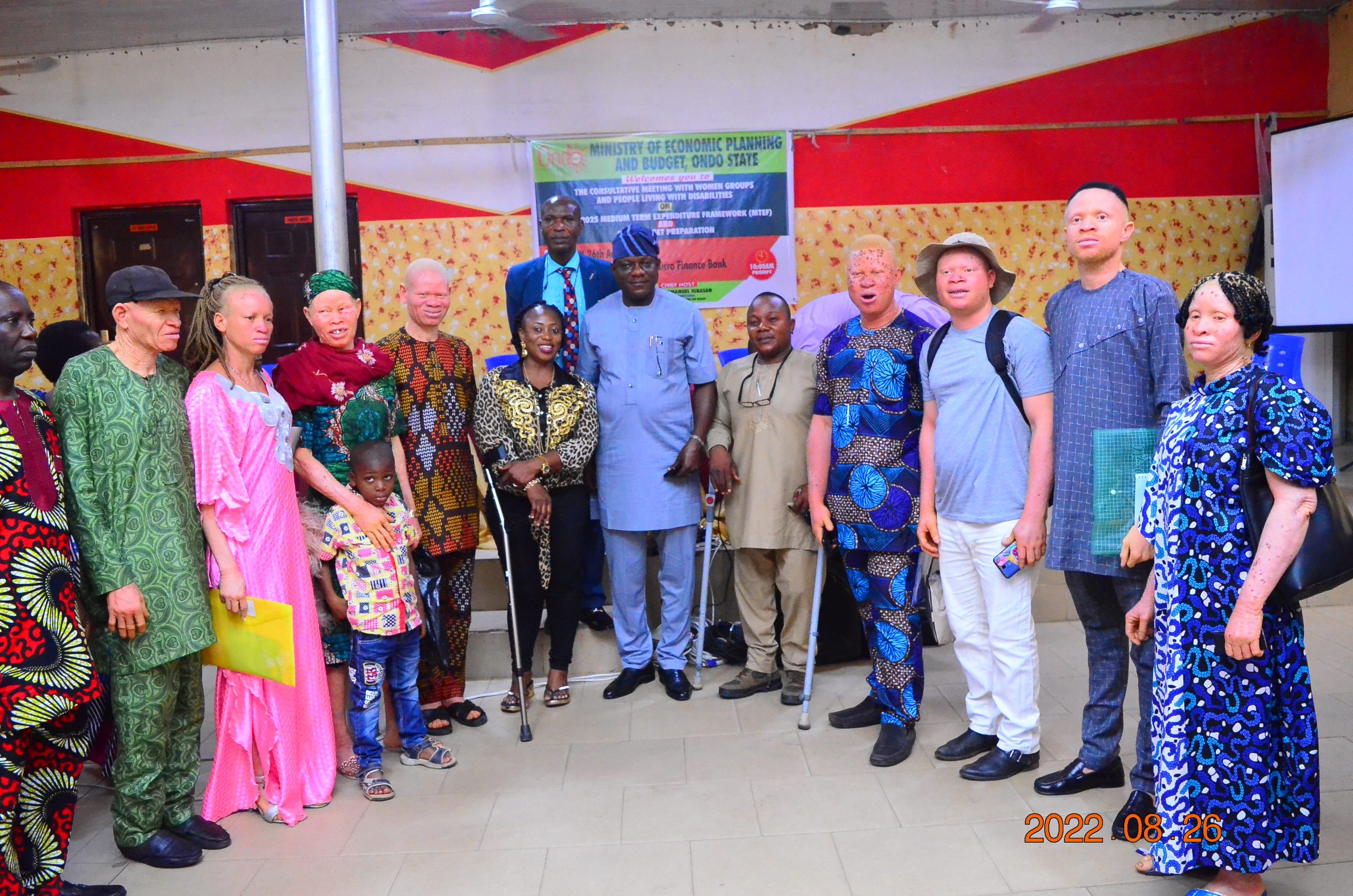 Ondo State Government has again reiterated its commitment to continue holding dialogue with the people to harness their inputs into 2023 budget in order to transform the state into one of the most developed in the country through strategic budget preparation, projects and programs implementation.

The Commissioner for Economic Planning and Budget, Pastor Emmanuel Igbasan stated this during the consultative meetings with various representatives of people and other critical stakeholders across the 18 Local Government Areas of the State on 2023-2025 Medium Term Expenditure Framework and 2023 Budget preparation which was rounded off in Akure on the 22nd of September, 2022.

The meetings were also held in the 18 Local Government Areas which were divided into 5 Zones having the traditional rulers, community leaders, Council chairmen, Vice Chairmen, Councillors of the local governments or their representatives in attendance.

Pastor Igbasan explained that the meetings were in compliance with the State Fiscal Responsibility Law, 2017 and continuation of the lofty idea of inclusive governance of the Arakunrin Oluwarotimi  Akeredolu SAN administration in the State that necessitated the strategic consultative engagement process.

According to him, the program was designed to garner their inputs and opinions on the fiscal policy of the state in a bid to ensure a prosperous Ondo State, declaring that the people's feedback on what was being done and what to do to expand fiscal space of the state would assist the government in making decisions, create wealth for the people. He added that the process would also reverse the trend of huge infrastructural deficit as well as ensure a better and brighter future for the next generation of the citizens.

The Commissioner explained that budget was not just arbitrary figures but a key policy instrument for allocating public resources among competing socio-economic nee. He stressed that the stakeholders' engagement on budget preparation was part of the budget reform process to engender inclusiveness and effective participation of people in the Budget processes

He noted that the State budget processes have been undergoing improvement under the present administration in terms of preparation, implementation, monitoring and appraisal, which according to him had consecutively qualified the State for accessing the State Fiscal Transparency Accountability and Sustainability (SFTAS) Program for Result (PfR) grants since 2018.

Pastor Igbasan added that through the collaboration and cooperation of different groups and other stakeholders on budget preparation, Ondo State was ranked the second best position on Budget processes in the 2021 fiscal year.

The Commissioner explained that through the Ondo State Investment Promotion Agency (ONDIPA), created by the Akeredolu-led administration, more completed and ongoing Industries had been established in the State with a view to providing massive job opportunities for the youth, increasing internally generated revenue and  securing great future for the state and her people. He also informed the people that Ondo State Enterpneurship Agency (ONDEA) had trained and empowered thousands of youths to set up their own businesses.

According to him, some of the Industries included, Ondo-Linyl Industrial Hub with Textile and Thread, Paper Mill, Ethanol Production, Wood Processing Factories and Truck Assembly Plant at Ore,, Development of Deep Sea port (Port Ondo) at Eruna/Ogboti, Ilaje LGA, with completed and required feasibility studies/reports but awaiting Federal government approval and Ore Industrial Park on 1000 hectares of land in partnership with Hessmac Industrial Ltd.

He said the government had signed numerous  agreements with Development Partners such as  AFD and AfDB to supply water to Akure and its environs, it has also made  provision for Cocoa, Cashew and palm seedling to farmers as well as employed over one thousand two hundred 1200 Primary School Teachers across the state.

Pastor Igbasan also informed the stakeholders that the present administration had commenced the reforestation process through replanting of several thousands of the State forest reserves on Public Private Partnership arrangement.

The Commissioner stated that the State Government through the State Security Network (Amotekun) has been fortified with modern equipment and recruitment of about 400 young men to enable it meet the security challenges of the State.

He commended Governor Oluwarotimi Akeredolu SAN for his open and transparent system of administration, which affords the people the opportunity to contribute and appraise government's activities.

Earlier, the Permanent Secretary, Chief Bunmi Alade had said the meetings were an initiative of the Arakunrin Akeredolu government to make budget preparation the peoples own.

While presenting the 2023-2024 Medium-Term Expenditure Framework (MTEF) and the 2023 Budget projections, the Director of Budget, Mr. Stephen Aworere, stated that the year 2023-2025 MTEF was aimed at addressing the second term REDEEMED agenda of the present administration for the benefit of the people of the State.

Mr Aworere remarked that the rationale behind the adoption of MTEF included the accurate estimation of resources available to the state within the medium term planning horizon.

He, however, identified outstanding salary arrears, effect of COVID-19, security and inadequacy of revenue as challenges facing the State.

The Director of Budget, therefore, stressed the need for all hands to be on deck towards increasing the internally generated revenue of government so as to be able to meet critical needs of the people.

The representatives of each group and other stakeholders commended Governor Oluwarotimi Akeredolu, SAN for the initiative of setting up the state security network called Amotekun Corps., who have curtailed the activities of criminals thereby making Ondo one if the most peaceful states in Nigeria. They also gave kudos to him over the various infrastructural development in all sectors across the State and called for blockage of all loopholes on revenue collection in order to generate more revenue for the rapid transformation of the State.